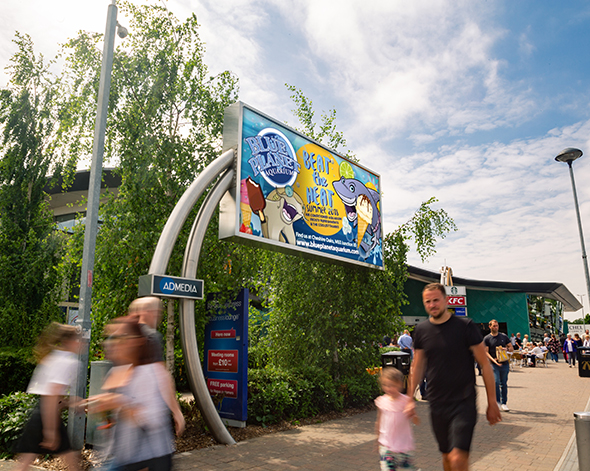 We recently unveiled our weather-reactive outdoor campaign for Cheshire’s leading Aquarium, Blue Planet Aquarium, utilising the latest Digital Out of Home technologies to execute a clever campaign dependent on real-time weather conditions. With the UK embracing sweltering conditions this summer, Blue Planet needed a point of access to outdoor audiences during such a buoyant time of the year, prompting them to consult us a for advice on a strategic approach.

The campaign was launched in key arterial routes across The North West, with the campaign targeting audiences coming in and out of the cities of Manchester and Liverpool. With over 72% of families hitting the road for days out during the school holidays, the outdoor campaign was impactful when targeting the aquarium’s key demographics. 2 vibrant and clever creatives were developed for available large-format high definition advertising sites, which were acquired to maximise the dynamism of digital technology, triggering a weather-dependent creative.

How we did it:

We delivered the campaign for our long-standing and established client Blue Planet Aquarium, following record-breaking admissions revenue for the aquarium on the back of their Easter ad campaign. The creative concept for the campaign was devised on the agency’s behalf, as it was decided that Blue Planet would make the most of the available DOOH technologies rather than sticking with the same static image.

For the Aquarium, rainy days and spring showers have been integral to bringing people through the door. However, this year’s heatwave has inevitably seen an increase in families opting for more outdoor days. Our Managing Director Mike Cleary embraced the change in weather: “This summer has provided a challenge for both the agency and the client. We decided to stick with the Jurassic Sharks campaign for the cooler days, but we wanted something that would tap into the tech.”

The campaign launched on Admedia’s Nexus technology, which has provided an ideal opportunity for the sun-specific Beat the Heat campaign. Mike went on to state that “Using the Admedia Nexus digital screens for Blue Planet’s summer campaign ticked all the boxes. It’s a targeted audience that reaches a high percentage of families driving out for the day, combined with full motion animation to maximise the aquarium’s visuals. Being able to show relevant creatives during specific weather conditions really added to the campaign.”

The ‘Beat the Heat’ campaign coupled with ‘Jurassic Sharks’ ensures contextual relevance for Blue Planet Aquarium, with their campaign providing significance for their audience. The delivery of the campaign in a digital out-of-format is an innovative approach, with the latest campaign making your daily traffic jam all the more visually appealing.

For an effective and successful ad campaign that can target local audiences, as well as international tourists and other visitors to the North West. get in touch with us on 0161 964 0480.